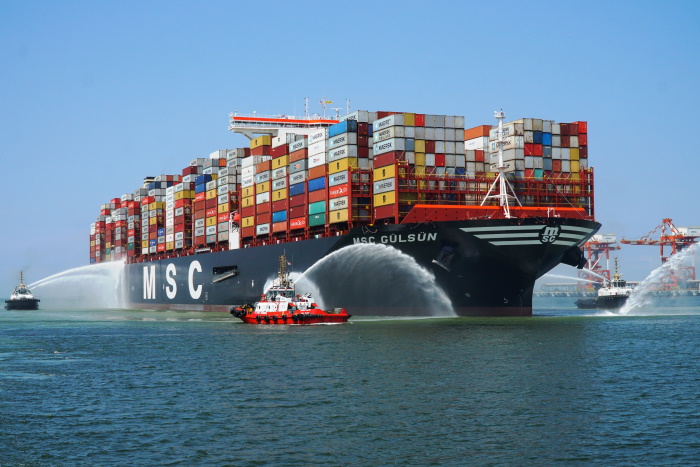 The passage of the largest container ship in the world across the Suez Canal was a significant milestone in the history of the development of this most important strategic man-made waterway, which connects Europe and Asia.

Specialized maritime container carrier MSC Gulsun, owned by the company Mediterranian Shipping Company, nowadays is the largest representative of its class Megamax 24. The ship is the flagship of a series of 11 similar ones built at the shipyards of concerns of Samsung and Daewoo in South Korea for transcontinental cargo carrier from Switzerland. Its useful capacity is 23 700 TEU, and gross reaches 232,000 tons. The dimensions of the bulk carrier are really impressive. The length of the truck is 400 meters, the width is 61,4 meters and the draft is 16 meters. It is capable of accommodating 24 stacked rows of 20-foot containers. MSC Gulsun with Panama flag operated from Tianjin (Xingang) to Northwest Europe.

An outstanding event has been organized at the high level. Aaccording to the Suez Canal Press Service the head of the grand construction Admiral Mohab Mamish boarded the container ship. He solemnly greeted the crew of the ship and handed a special memorable mark of distinction to the captain.

To ensure the vessel’s safe passage through the channel significant preliminary work has been done. This was due to the fact, that the width of Gulsun is only 70 centimeters smaller than the maximum norm of 62,1 meters. Even the container ships of previous generation Megamax 23, that have the width of 59 meters, encounter certain difficulties when passing the Suez Canal. This time, the administration of the international artery and the relevant services had to fully use the duplicating channel built in 2015, located near Ballach, which is often called the New Suezem. Tugboats under the control of specially trained captains were used in the operation for the passage of the world’s largest marine container ship to the north.

Sluiceless channel, that crosses the Suez Isthmus in Egypt and connects the Red and Mediterranean seas, is a short and convenient sea lane between Europe and the waters of the Indo-Pacific Basin. Today, this artificial shipping artery accounts for 10 to 12% of all global freight transportations by sea. The length of the construction is 160 kilometers, the width on individual parts reaches 350 meters, and the constant depth  is 20 meters. To increase throughput, an additional shipping sleeve was created in 2017, the total length of which is 72 kilometers. According to the official information sources, construction and installation costs of a new doubler channel amounted to 8 billion US dollars. However the speed of ship movement has increased significantly.